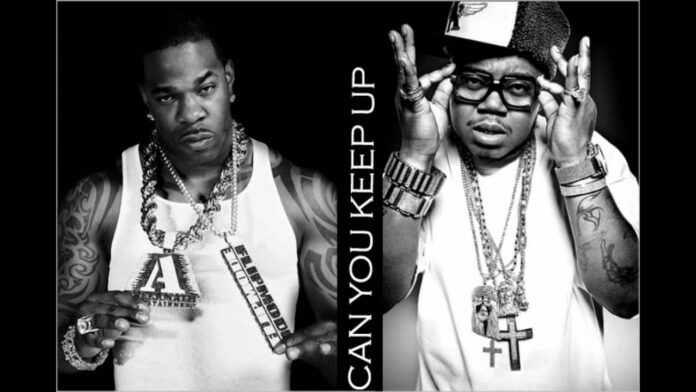 [Verse 1 - Twista:]
Now it's finna be some energy, we got the remedy
I'm in the vicinity of a nigga that can spit it with me
Feel the fire whenever we act up
Everybody else is incompatible with the artillery
So forget about it when you hear about it
Cause it's too fast when I pass the baton to Busta

[Twista and Busta Rhymes:]
Hit a victim in the middle of the body with a bullet and a rhythm
Every murder is a structure

[Busta Rhymes:]
Every time I hit you niggers with another jam be blacking
I be sounding like a nigger full of anger
Now I'm back to beat you in the head, I'll bring another banger
With my nigga Twist, everything we do be up to wanger
You don't really, really wanna see the way that I come
And I'll give it to you, get up on the ceiling see a nigga numb
Do it how I wanna do it 'till I make another nigga drop
I put my money on it, homie, I'm the one

[Twista:]
Go on here, pick it up, carry it the way you wanna carry it
Do whatever you wanna do
Show the competition how we gunning too when we coming through
Better never let a nigga never get in front of you
I wanna be, I wanna pro, wanna get in
Then racin' so fast, they call me flash

[Twista and Busta Rhymes:]
Don't nobody really wanna
We can hit 'em like a couple of millimeters
Woopin' a niggas' ass

[Busta Rhymes:]
Skibbedy boop, skibbedy bop, skibbedy beep
I'm skipping all over on another Just Blaze hit
Now I know a lot of y'all been sitting, waiting and wondering
Was we ever gonna do this shit
And then we came to hit 'em with another flow
Pop champagne, celebrate and kill another show
Gotta campaign, the greatest niggas, y'all already know that
Never do this kinda shit, Twista, get 'em, gotta go
Now I gotta ask y'all

[Verse 2 - Twista:]
Kill everybody cause I'm gunning outta stress
If I'm running outta breath, he gonna pick up where I left off
Keep him with me when he spitting cause the flow be the bidness
I'm a menace when I bust a lyrical tec off
Go faster than Ricky Bobby, kill him in Talladega Nights

[Twista and Busta Rhymes:]
Niggas try to get up, when a nigga hit up
When it I come I promise you gotta pay the price

[Busta Rhymes:]
Look, why don't everybody wanna come and try get a little taste
Of the shit I got, let me put it all up in your face
When I spit it I got a nigga wilding all over the place
Everybody better listen here
Cause you know when I bring him I will never, never stop
Make a nigga rewind and bring it back to the top
Throw the shit up in the streets and I be running every block
Everybody better stand clear

[Twista:]
Like a millimeter when I be booking the track up
Motivated for murder whenever I act up
A couple of phenomenal niggas can stack up
Gets anybody that wanna live in the back up
Killing everybody when I bust a clip off
Cause I'mma be attacking them with the insane flow
Then I be having them calling me Twista Phelps
And my nigga Buss like Usain Bolt

[Busta Rhymes:]
Shocked a nigga like I was a thousand volts
Now I'm feeling on the beat the way I'm feeling on the boat
The way I gotta kill 'em and the way I gotta flow
You don't really wanna test me, boy, cause I'll pop ya
When I'm in the spot you know you can't leave
I spit every word 'till, damn I can't breathe
You never heard 'till you nosebleed
Twista, please
Now you know I got ya
Now I gotta ask y'all

[Verse 3 - Twista:]
You can talk about it with a bunch of people
That say that I'm a lyrical manifestation of rhythm

[Busta Rhymes:]
Then I come and do the shit I gotta do and then I bang 'em
And get 'em and do it every single time I hit 'em

[Twista:]
When I do it its gotta be accurate
Like I'm attacking the rhythm with such a vocal tenacity

[Busta:]
See the way a brother blacking I'm back and infant
Cause every time we in the place you feeling the capacity

[Busta:]
Don't you ever forget it the way we coming
And they sending somebody, gonna probably be needing a medic
So give us the credit and I thought that we should oughta
Be coming to slaughter so call out the order see the way we do it