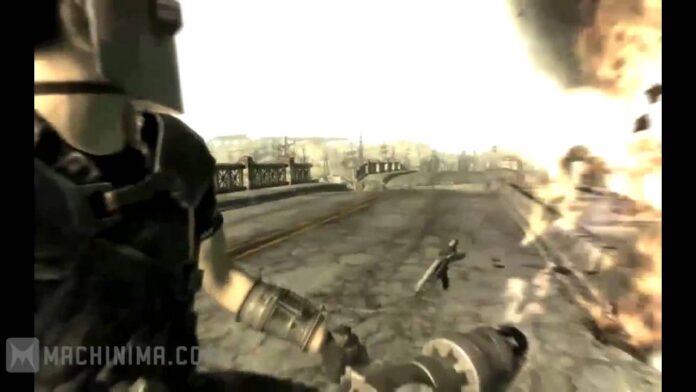 Never mind a Rolex, I got my Pip-Boy
And I'm ready to make some
Capital in the capital

Look, ever since they dropped
The atomic bomb
You've been hold up in Vault 101
And since your momma's gone
You focused on abilities
Perception, endurance, intelligence, agility
Your skill in these categories is clear
And apparently you'll be needed
And since your daddy's disappeared
Now you're a big boy
Got your own Pip-Boy
What you need to succeed
Is a pistol to destroy
Anyone who's dumb enough
To look for trouble over here
I've had it up to here
With the fuckin' Overseer
Kill him or go with stealth
Don't let nobody see it
Now you're overground and out
And the coast is clear

Here, a wild frontier
Is what we see
A post-apocalyptic Washington D.C.
You should be headin' on whatever the direction
If you're a clever one you'll be visitin' Megaton
You'll meet the residents
And the Sheriff Lucas Simms
Now you can help him out or end up shootin' him
This sort of drama can cause your karma to diminish
But you do what you need to
When you choose to win
It's law of the Wasteland
So all of you wastemans oughtta stay back
And get a tool face abd when I pull out my strap
and activate the V.A.T.S.
There's no way that
I'll let these twats escape the blast
I'll blaze away but the way my
Rants are raising fast
A super mutant high on Psycho couldn't take my ass!

I've never seen a blade of grass, this place is shit
So I need to locate the Garden of Eden Creation Kit
But before I do that, man
It's time for action I have got to find the balance
In between the rival fractions
The battle's gettin' hyperactive
Radioactive, Reilly's Rangers, Talons and the savage Raiders
Packed in conflict with the Enclave
Crushin' Us under the heel
But I keep it bloody real
With the Brotherhood of Steel
We're heading for the war to end all wars
Not to mention all the sentry bots
Centaurs and deathclaws
You best pack a deadly force
Or you'll end up gettin' in more
If you think that just a stimpak is plenty for
Level up, get better heavy weapons and perks
'Cause no matter hard you are there's an enemy worse

Ladadadada
It's the motherfuckin' D.A.W.G.
Three Dog!
Ladadadada
I'm on the radio in Fallout 3
You better make your way to Rivet City
And speak to Doctor Li
About Project Purity
When you installed John Henry's FEV
Or will you connect the GECK and set the people free?