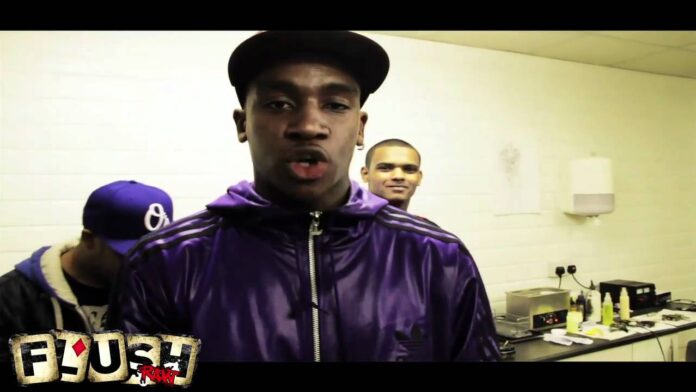 Picture this I'm chilling
But the guy next to me must have been pilling or something
Because he keeps ramping and chatting
But the way that he's doing it's pushing a button
It's like I can feel it inside me
I don't wanna get vexed and knock the kid out so I don't and I keep it inside me
'Cus I don't wanna wake up in a police cell with no shoe laces and a charge sheet
So that's why you see that I'm holding it down
But you know I'm not down with batties
So the guy next to me best step back
Before he gets rushed like a fatty
With his bottom lip bust, forehead cracked
But I look and he's looking right at me
So I'm thinking does he want it with me, me?
So I start turning a bit
I'm screwing and my head starts burning a bit
But I don't wanna' waste time teaching a prick that it's daft to be rampinh and deeking and shit
Deeking and shit, but he's still watching
I've got a drink in my hand, I'm cotching
Does this nigga want dragging and spinning to the side of the room where nobodies standing?

So I stand up and look round
Drink in my hand everybody put down
'Cus I can feel it going off soon, if it does everyone will be running around
But he's not ready for what I'm packin'
I got a machete in my waist line no doubt
But I call it the Samurai sword
When I whip it out;
Everybody starts running about, I start running about
I don't pull a gun out
Everybody's screaming looking to duck out
But back to the point with the guy deeking, he got brave and told me to suck out
I did say it I was ready to destroy that fool
Wasn't ready for the devil to employ that fool
Try to chief a nigga but didn't bring no tool
So I said 'you can suck out'

Turn into the devil, this time whip out the Samurai sword so quick that-
The nigga that tried it got looked at
I was gonna let him off but fuck that
I made sure that nigga got chopped up bad
And the rest of the niggas that looked back
Got chased to the fire exit caught up and left in a blacked out body bag
So I'm leaving the place, place
Cus I know Feds' will be all over the place
And my heart beats slowing down now, it's going about the same speed as the bass
So, so, I'm on a back street now, by myself and I put the Samurai sword down
Walking the street blacked out hands in my pockets and a blacked out car slow pulls down
4 niggas pulled up in a blacked out whip
3 niggas jumped out on a hype ting
First nigga jumped out
I said "really whats good"
He said "nuttin, but I am on a hype 'ting"
I did say it I was ready to destroy that fool
Wasn't ready for the devil to employ that fool
Try to jack a nigga but didn't bring no tool
So I said, "I am on a hype ting"
Turn into the devil, sky turns red
Everybody starts running about
Them niggas got clapped up
For running their mouth, but keep your trap shut I'll run in your house
My hype 'tings over, jump in the whip
Put the pedal to the metal
Lights on red, red
Don't give a fuck I just start skidding about
Don't give a fuck I just start skidding about

I've been keeping an eye on them, I've been gone
Moving sly on them, don't think cause the mixtape dropped that-
I switched up and turned pretty boy guy on them, it's not 'dat
I don't confide in them, I don't care if anybody's buying them
'Cept man asked for a free CD and I just access denying them
Move sly on them, 'cus I'm Bugzy Malone and I hire them
And if he ever comes back with the wrong beef, switch like Nino Brown and fire 'dem
I'm a tyrant, and I'm coming out of retirement
You got straps, but you rely on them
Are you forgetting that Bugz is violent-
With anybody that you know, your brother got beat up by Bruno
Twisted up like say you never knew Judo
Don't care if your belly big like Sumo
You don't wanna see me turn 'loco
Turn into the devil, sky turns red
Everybody ends up with a broke nose, set niggas got laid down with a low blow
One peck and I'm Bugzy Malone [?]
Make everybody go sleep like Roy Jones
Leave niggas with a slice, Kimbo
Not even hittin' them twice, bingo

Sleeping, went to a party Saturday evening
The minute I walked into the kitchen
The tallest kid in the place was deeking
Leave him, well I tried but he lost his mind and just started switching
That's when I turned cold, freezing
I said "come to the road", screaming
True story, stay locked in
'Cus you're looking at the hand that knocked him
And you're looking at the man who knocked him out
I left girls screaming "you've killed him, you've killed him, you've killed him"
Shake up everybody in the building, 'cus I'm hitting on flush
And that's ironic, 'cus it is Flush that's filming
Yo, but town just to show what the manny man are bringing [?]
Just bars, no singing, just stars, no long ting
I'm the Swagga-man, I've got the wickedest 'garmz to the wickedest 'crepz no joke ting
I bring fire to the booth, it's smoking
I use the lighter and gas to provoke him
It's potent, everybody in the place now needs a gas mask 'cus they're choking
I'm not boasting, when it comes to this heater 'ting and road side I'm toasting
You'll get sprayed up, left soaking
You might find me in the manor just loaking
Or in the gym just hitting and moving
The mixtapes got the wickedest tunes in
I'm coming with a new sound, got everyone running a running right round, banging
Mortal Kombat freestyle, get over here, Scorpion wins outstanding
Look, let me drop back in, Bugzy Malone I get sick, crack in
I started this thing full to the brim
But I start- half of the riddim, just don't pack in
I go down with this shit, Captain
Since I'm one of the last men standing
I leave all of your niggas just acting shared, shook, hands rattling
They don't want it, they get smacked in
I spent most of my childhood battling
So I'm an OG in my own way
If you don't believe me ask Paul who slapped him
I sacked him, 'cus he was out there causing trouble and attracting attention
I don't need that without a mention, ran man down like a P reg engine
I don't care what you're curling or benching
You could be 6 foot 5, hench and looking like a serious guy
I'll still reach up and knock you out, sleeping
I don't care who you chill with
You could be 6 foot 8, sick and chilling with a load of your mates
I'll still start throwing about my weight, screaming