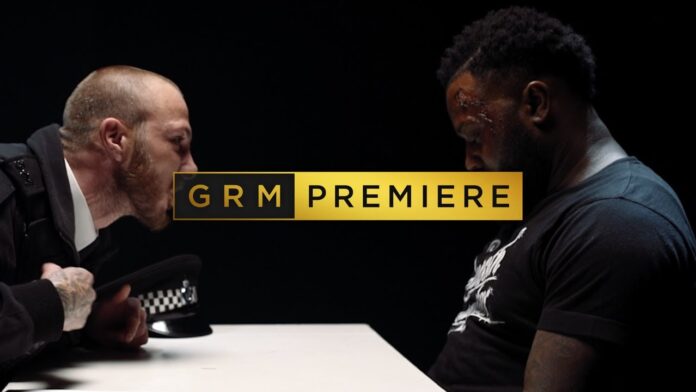 Yo, ma' nigga
Sorry I had to rough you up like that but
You weren't playing nicely init (L.A. Beats)
You know my team, you know what we represent
So play along nicely, init

Let me tell you who I am
I'm gonna talk; you just gotta listen
Started off getting bullied in school, look
Most my life I've been a victim
Never had a girlfriend
Got low self-esteem but I wanna be the man
No I don't like who I am
But when I'm older I'ma do what I can, but
Look at me now
Hop out and run a man down
'Cause when I was younger I never had a voice
Might be the reason I violate your boys, and
And I even go gym
Man it's different from when I was a kid
A real bad man, real talk—no bluffing
Tell girls what I do and they love it
I spent a couple months in training
Even had me doing ten toes on pavement
Making sure the ends was behaving
See, it's so bad but I ain't complaining
But now I'm perfect with the aiming
And I'm a driver, been in bare car chases
Might pull up when your bredrins are raving
Lock off the rave, nobody can say shit
If you knew how much food I confiscated, it would drive you crazy
I'll grab man if he's got cash on him
Or wrap man if he's got wraps on him
I see man driving mad
I pull man over like, "Wagwarn, fam?"
Rude boy, I don't give a damn
Call back quick and just violate man
I don't slip, I got my vest on
Big baton and a taser are the weapons
I could fold a man right now, with an M16 or a shotgun
Bro, it can get long
Don't press buttons but the trigger might press one
Call the judge, my case I can get gone
Take man's food, I don't care what it is
Could be peng, flake or ten times stepped on
Niggas know me, I don't care what number your gang is
Think we're bad? We got bangers, make man have manners
Put you in a cell for twenty-four hours
Like, what you gonna say, brudda?
Waste man's time 'cause I want to
Like fuck that, what you gonna say brudda?
Pussy-hole, do your research, the system's in my favour
Fuck you up right now
And I'm calm it won't make the news or the paper
Yeah, I got it patterned like that
No I shouldn't but, yeah, I'm bragging like that
I'll say, "You put your hands on me"
I know you never, but I'll say it happened like that
Nothing, no, you can't tell me nothing
Bust cases all the time like it's nothing
You know how much shit we did?
It was my team that got down Mark Duggan

Next day on the force, we back, again
Get searched 'cause you're black, again
Choke out Rashan Charles from East London, say it's an accident
And I'm this close to banning drill, and done that shit
Someone got stabbed at the neck of the woods
Mm, yeah, we love that shit
Yeah I know about grime, LinkUp and all that
Where you're so stupid, stab someone; go booth and record that
And then say you're on obbo, no, you're just so easy to follow
And I got a quota that I gotta reach
Get two more of you lot by tomorrow
And let me tell you suttin' to tell your brothers
It don't matter that you got a bally on now
There's videos before when your face ain't covered, you stupid pricks
You make me sick
Like, "Officer, I'm recording you"
So? You think I give a shit?
When he say this don't complain 'cause they see me taking the piss
One, they never do
And two, if they do I get a slap on the wrist
So, pussy-hole, let me tell you suttin'
I can violate you for fucking nothing
And get away with it 'cause we're the judges
Stop saying, "Gang". we're the only gang in London, pussy