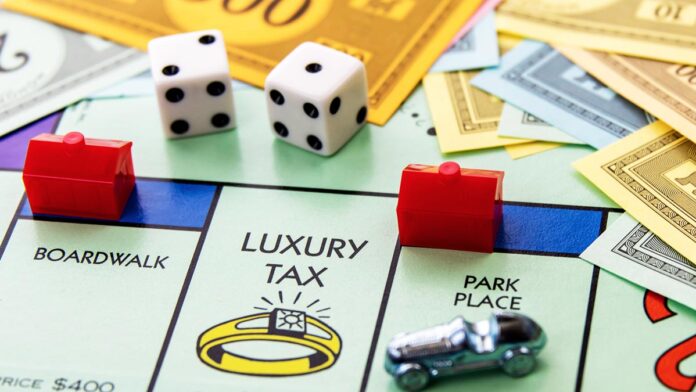 [Verse 1:]
Okay, here's my thesis, pay attention as I teach this
Lesson on monopoly coming from the rapping Jesus
Eight paths to choose, sorry to sound facetious
But life is a battleship; it'll blow your ass to pieces
'Round here, we push race cars and dogs have no collars
Status symbols, girls be thimbles to avoid pricks and ballers
Press like irons for the latest kicks, now can nobody top that?
Praying to win the lotto, fill the wheelbarrow, top hat
You want to win in this game? You better settle your past
That's your ultimate goal, is to have the most money and assets
32 houses boarded up, only twelve hotels
You can make it out the hood, if your game goes well
Tax time; every player gets a rack and a half
Everybody sees the banker, makes certain he's good at math
Two 500's, two 100's
Two 50's, six 20's five 10's, big money
Five 5's, five 1's, everybody got some
Right now you pushing [?]
On the corner, deciding who goes first
The highest roller starts the game, ain't trying to see no hearse

[Hook:]
I got a monopoly, I'm a buy up everything
When I say everything, yes I mean everything
Everybody next to me, gon' show respect to me
Cause I have a monopoly

[Verse 2:]
Yo, your roll determines your own fate, move that many blocks
Double up, and get a second chance for you to make your marks
See some property you want? Buy it from the bank
Or they may sell it to the highest bidder, I suggest you think
Somebody crashing at your pad? Better collect your rent
Or they're gonna use you and roll out, and you won't see a cent
In this city, if you screw up, your ass is going to jail
And you gon' be there for a while if you can't pay bail
I'm singing you can pay a fine for all the money you earned
Or a double gets you out if all your money is burnt
Don't sweat it, cause if make it 'round the block, you get 200 bucks
In the hood, and that's why [?] there's no such thing as luck
And while mom is at church filling up Community Chest
You'd rather take your chance of failing knowing you can be best
You copped a piece of land, flipped it, and made a frickin' fortune
Your fam is calling you savior cause you gave them abortion
Increase your rent and build more houses, now your house is worth more
Ready to cop a hotel after investing in your first four
Make sure you're buying all the same colors
Making up your mind, while often change others
Block your opponents from owning entire property groups
Or they'll increase your mortgage and you'll probably lose
Winners monopolize the board and make a name for themselves
Ruling out other players, making money, soaking up wealth