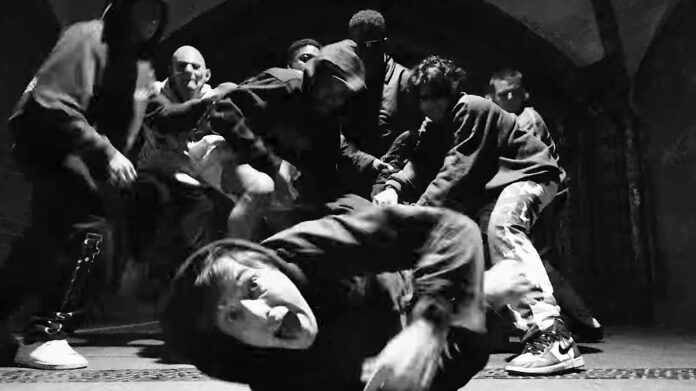 [Bearface:]
Out on the deck like I'm wildin' for respect
It's a three-peat, see-see
Bitch, you in the D-League
Boy, you fucked up
Can't come around here, this shit is gated
We made it, happy belated, I see the rage hit

[Kevin Abstract:]
It's better if I try not to talk about the shit that's always on my mind
Money on my mind (That's right), couple hunnids at a time
Try to fuck me blind, duckin' down, hear me whine (Ooh)
We outside now (That's right), milk carton in the back
We don't like to fuck around with them niggas in the back
Pullin' triggers in the 'Lac (That's right)
May the praise stay bad
Ayy, Dad, Hercules want his fuckin' waves back, stay strapped (Ooh, I like that, that's right)
Dancin' like a bad bitch, love on top my mattress
Hope the good Lord catch this, I ain't tellin' backwards
Lie just like an actor, Hollywood is batshit
Mama in the South still, gold all in my mouth still
Rappin' 'bout dick still, and I lease a house still
Move my nigga out, still need my nephew out here
God gave me a good deal
Miss my little niggas down low like a big wheel
Bitch, I wanna hit still
This shit for my partna 'nem, Devil keep on robbin' them
Express and feel myself, like I'm fuckin' Dennis Rodman (That's right)

[Joba:]
Sugar, yeah, gimme some
Gimme dome, I'ma smoke some
Y'all ain't want the smoke, been smokin'
Garden gnome shrooms, y'all, who is y'all?
This what it mean to ball?
Okay, Chateau Marmont, Shangri-La
Valet park it, drive a shit whip
But I ain't broke, bitch
Write my own shit, hit my own switch
Watched the clock tick, never ran and hid
Tell it like it is
Dead on the nail, call me hammerhead
Texas 'til I'm dead
BBQ and cornbread, like 'em corn fed
Here we go again, hit 'em one mo' 'gain
Screwed up from The Woodlands
Number six, been through Hell, think I'm Heaven-sent
Ask the preacher man, said I need Jesus, like I ain't know
Guess I found him, I am blessed, man
Rake in dividends, let the money stack, see you copycats
I ain't trippin', but copy that
It's a wrap, keep my distance
Where's Waldo, but we winnin'
Me and my dogs ain't finished (That's right)
The real know, what's a billfold?
You can't fold, I stay grinnin'
No peekin'