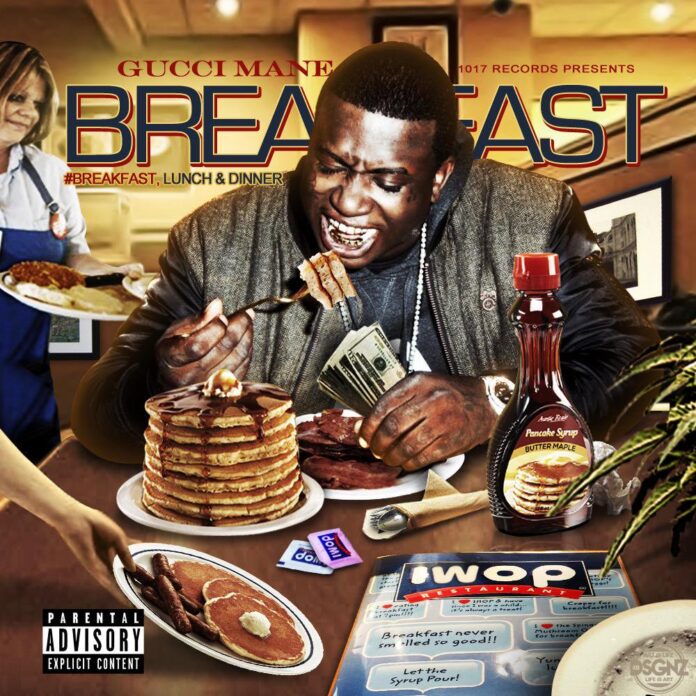 [Gucci Mane]
I'm an East Atlanta rider
You gon' fuck around and get ya whole clique tied up
My brain fried; I'm on the skull of the Impala
I'm high on kush, it's 'bout my money mixed with power
So keep it brief
Nigga, two hundred thousand in the fleece
Pistols, two hundred twenty on the dash
System, I pull off it look like a flash
Picture, cheeeeeese!
I got the 24's, those 74 for 2's
When you was on the stage, Gucci was on the news
But bitch don't pity me, I look like Mr. T
I pimp like Soulja Slim, but I think I'm Eazy-E
It's Gucci

[Waka Flocka Flame]
I'm the young nigga all the old head love dawg (FLOCKA!)
I ain't lettin shit slide, this ain't baseball (BRICK SQUAAAD!)
Banned in 45 states cause I'm too real
Waka Flocka like a Gucci album, I'm hard to kill
I don't think they fuckin with me whether I'm locked dead or in jail
I'm from Clayon County, Riverdale so I'm supposed to give 'em hell
I'm aware the grass got snakes, I'm aware they gon' hate
You too late, I'll be damned you take this dinner off our plate
Dirty Birds, Dirty Birds, twenty-one gun salute and got killed
It's Bankhead Brick Squad out in U.K., these niggaz ain't fuckin with me
Mob up off that run day, SK's, AK's
Throwaways I let that triple up like {?} triple beam we crackin

[8Ball]
Gucci Mane, Waka Flocka and ya boy big Ball
Hard from the start; I ain't never been no fuckin lame
Here I go with Waka Flocka, here I go with Gucci Mane
One of a kind - that Memphis 10 runnin through my bloodstream
Ghetto superstar - man them hood bitches love me
Cup full of that ol' purple drank, pullin on some of that stanky dank
Pocket full of Benny Frank and bitch, what the fuck you thank?
45 hollowheads in my stout, yellow purt{?}
I hope one of these ol' bitch bitch-ass niggaz don't cross that line and get hurt
Money what we came to get, money what we represent
You ain't talkin 'bout shit if you ain't talkin 'bout gettin it
Hard hustle never fold, forever I will be cold
Forever I will be big Ball, mouth full of gold