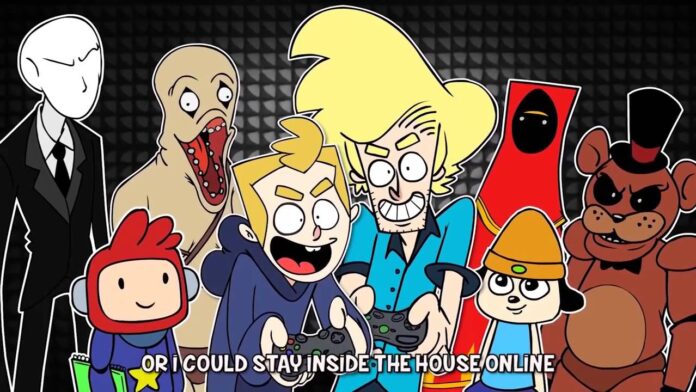 Hey hey hey this is PewDiePie's channel
And if you don't like that I'll slap you with a flannel
Hop on my camel and chase you to the North Pole
Aaaah my camel's out of control!
Run, run, call the police
I'm going to the zoo there's animals to release
I'll take them all home and show them my games
Take pictures of them all (smile!) and keep them in frames
His name is PewDiePie, ladies claim he's a cutie pie
Millions other disagree and say he's just a stupid guy
So who is right? Let's look at the facts
Dudes that like him, or that attack?
Hang on a sec, what does it matter?
Refuse to fight, it's a horrible act

I'm taking on YouTube in a tutu, woo hoo
I'm bigger than you, you and you…boo hoo!
There's loads of dudes getting in feuds with Pewds
But I'm infused with juice and ready to bruise these noobs

I'm a velocirapper, ferocious
A new subscriber every day since diplodocus
I'm clearly the dopest, the rest of you are hopeless
I'm on a global stage, you're on some sofas
You're bogus, hocus pocus, no focus
I can't decide if I should punch you or give you a brofist
You look as if you stole your sister's hair
Aww watch you gonna do, throw Mr. Chair?

Edgar Allen, Edgar Allen, are you responsible for what I'm smelling?
I'm rippedy rapping and bibbedy bapping and hippedy hopping
There's nobody stopping me, so whatever you're watching
You better be stopping and paying attention to P…E…WDIEPIE
He's even sweeter than a blueberry pie
I feel like I'm motherfucking stuck in this duck
It makes me want to quack like what the fuck is that
Genius Pewds strikes again with the speed of Raikkonen
And if I couldn't watch his videos I think my life would end
So, goodbye bros, see you tomorrow
Yeah so, goodbye bros, No Stephano!

I could play a moba game for hours til pro
Or I could choose to stay on YouTube with thousands of bros
I could learn to sing to huge crowds at my shows
Or I could join the chorus of this one, how does it go?