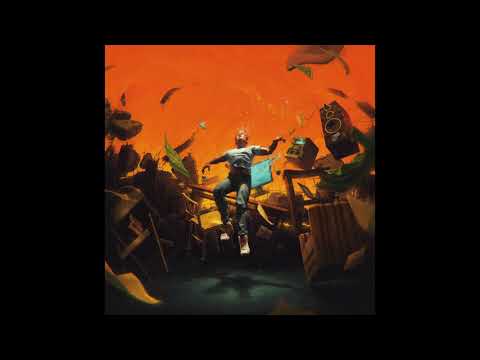 Five hooks, man
Ayo, this shit only got like five hooks on it, dawg
All lyricism, ho
I was like, "Yo, I'm pickin' up that pen, I'm goin' fuckin' crazy"
I don't give a shit, dawg
Yo, we finna, ayo, ayo, fuck Raquel though, fuck that bitch

It's what you all been waitin' for, ain't it?
This No Pressure shit kinda got us reacquainted
I'm happy you could join me in this universe I painted
Such a beautiful feeling, I really can't explain it
I hit the stage and like a thousand bitches fainted (Nigga, you ain't shit)
Damn, that boy, he back at it again
Droppin' bars when I pick up the pen, so let's begin
No I.D. my mentor, but it's time for the story's end, yeah
Ayy, I'm tryna do shit different now (Woo)
I love this BPM, but this a different style (Woo)
I never been this happy before, this a different smile
Hey, yeah, this that barbecue music
Life is a blessing and a curse depending how you use it
Some days I'm happy, some days I'm fucked up
Some days I tell the voice in my head to shut the fuck up

Yeah
Motivated by paper and pussy, always been a passion
Whippin' that Chevrolet Impala, my speakers blasting
Hungry like I'm fasting, who the illest? Just ask 'em
Louis Vuitton rhyme, relevantly old-fashioned
Like we (Like we), like we always do it this time, homie
I go for my homie, I gots to shine, homie
All I do is grind, homie, all I do is rhyme
I provide for mine, homie, uh, uh, y'all know me (Yeah, yeah, y'all know me, yeah)
I started with just a dollar and a dream
Like Jermaine in '09, know what I mean?
Fresh on the scene like a first take
I dropped my first tape then felt the earth shake
But let's accelerate
Dropped the second tape, 2011, and now we elevate
Def Jam wanna sign me, it's time to celebrate
But little did I know, I had so much further to go
Let's take a trip down memory lane
Logic arrived and he fucked up the game, simple and plain
Never scared to do it different, no two albums sound the same
I got tracks with Wu Tang and 2 Chainz, Killer Mike and Gucci Mane
Rap shit, trap shit, you know I do it with no shame
Spit the illest yoke or flame, always go against the grain
I was fly before the fame, before I could afford a plane
Touch down like Notre Dame to get as high as my strain
2014 release day, I need morphine
Def Jam undershipped me, now the CD on the rack
RattPack had to ask 'em to unbox it in the back
What the fuck is that? Honestly, it sound like a fable
Fast forward, 2020, I'm the face of the label and I am
Who gives a fuck about the leak when you got the well?
Watch me excel, propel, then ghost the fuck out like Dave Chappelle
You the illest, pray tell, I'm like God before Lucifer fell, I raised hell
Had bars when I was broke 'cause I couldn't raise bail
But now my bars gold 'cause I'm Wall Street, broker
Money like I sell coca, livin' La Vida Loca shit
That ain't a line just to flex, just to let you know you next
If you put your mind to it, you can do it
Trust me 'cause I been through it, now get to it, ain't nothin' to it

Actually living your life is exponentially different than just being alive