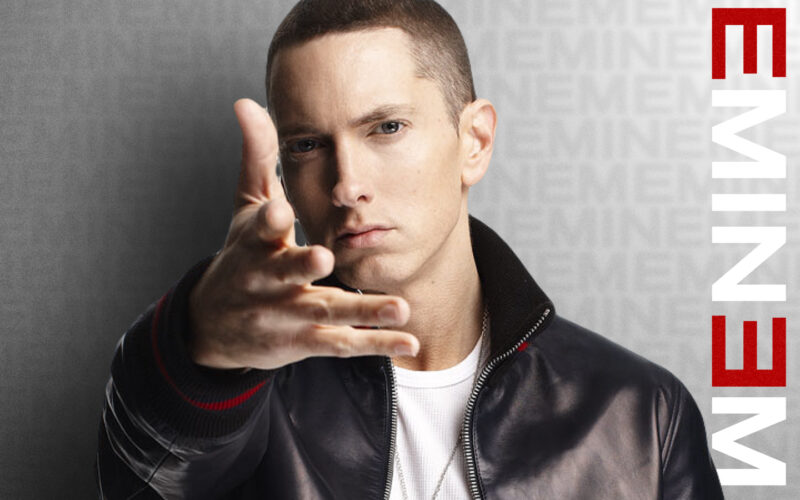 Eminem Has a full line of chainsaws Eminem… Eminem… Eminem… Eminem… Eminem… Eminem… Marshall Mathers, Eminem, the rapper… Eminem Who can say fore sure? Perhaps a frontal lobotomy would be the answer If science can operate on this distorted brain and put it to good use Society will reap a great benefit [Verse 1:] I walk around like a space cadet, place your bets Who’s likely to become a serial killer, case of Tourettes Fuck fuck fuck can’t take the stress I make a mess, as the day progresses, angry and take it out on the neighbors hedges Like this is how I’ll cut your face up, bitches with these hedge trimmin’ scissors with razor edges Imagination’s dangerous it’s The only way to escape this mess and make the best of this situation, I guess ‘Cause I feel like a little bitch, this predicament’s Despicable I’m sick of just getting’ pushed it’s ridiculous I look like a freakin’ wuss, a pussy this kid just took My stick of licorice and threw my sticker books in a picker bush I wanna kick his tush, but I was six and shook This fucker was twelve and was six foot with a vicious hook He hit me I fell, I got back up all I did was book, now there’s using your head Mama always said… [Chorus:] If you had a brain you’d be dangerous, a brain you’d be dangerous I’m a prove you wrong Mama, I’m a grow one day to be famous and I’m a be a pain in the anus I’m a be the bomb I’m a use my head as a weapon, find a way to escape this insaness Mama always said, son, if you had a brain you’d be dangerous, guess it pays to be brainless [Verse 2:] Fast forward some years later a teenager, this is fun, sweet I just got jumped twice in one week, it’s complete It’s usually once a month, this is some feat I’ve accomplished they stomped me into the mud, gee for what reason? You stumped me But how do you get the shit beat outta you, beat down and be up beat, when you don’t have nothing? No valid shot at life, chance to make it or succeed ‘Cause you’re doomed from the start, it’s like you grew up on Jump Street from jump street But if I could just get my head out my ass I could accomplish any task Practicin’ trash talkin’ In a trance locked in my room, yeah but I got some plans, mama These damn rhymes are failin’ outta my pants pocket, I can’t stop it And I’m startin’ to blend in more In school this shit helps for sure, I’m gettin’ more self assured then I’ve ever been before Plus no one picks on me anymore, I done put a stop to that, threw my first punch- end of story Still in my skull’s a vacant empty void been usin’ it more as a bin for storage Take some inventory In this gourde there’s a Ford engine, door hinge, syringe, an orange an extension cord and a ninja sword Not to mention four linchpins, an astringent stored Ironin’ board a bench, a wrench, a ore, wench an attention whore Everything but a brain, but domes off the fuckin’ chain like an independent store Something’s wrong with my head Just think if I had a brain in it, thank God that I don’t, cause I’d probably be Dahmer, ‘cause mama always said… [Chorus] [Bridge:] Now my mom goes wahm-wahm-wahm ‘Cause I’m not that smart, but I’m not dumb I was on he bottom of the pile gettin’ stomped But somehow I came out on top (Oh-oh-oo-oh) [Verse 3:] I told you one day, I said they’d have that red carpet rolled out, yo I’m nice ya’II, fuck it, I’m out cold Now everywhere I go they scream out go, I’m bout to clean house, yo I’m Lysol, now I’m just household Out sold the sell-outs, freak the hell out middle America, hear ‘em yell out, in terror they were so scared and those kids Just about, belted out whatever spouted or fell out my smart aleck mouth it was so weird Inappropriate, so be it I don’t see it Maybe one day when the smoke clears it won’t be as Motherfukin, difficult yeah, ‘til then hopefully ya Little homos get over your fears and phobias It’s ok to be scared-straight they said I provoked queers ‘Til emotions evoke tears, my whole career’s A stroke of sheer genius, smoke and mirrors tactical practical jokes, yeah You motherfuckin’ “insert insult here” Who the fuck woulda thunk that one little ole’ emcee’d Be able to take the whole culture and re-upholstery it? And boy, they did flock, can’t believe this little hick locked This hip-hop shit in his hip pocket and still the shit got That white trash traffic in gridlock shit hoppin’ like six blocks From a Kid Rock Insane Clown Posse concert in mid October And God forbid I see the Wizard and get a brain in my titanium cranium, y’all cause I’ll turn into the Unabomber mama always said… [Chorus] [Outro:] Insaneness ain’t even a word you stupid fuck Neither is ain’t