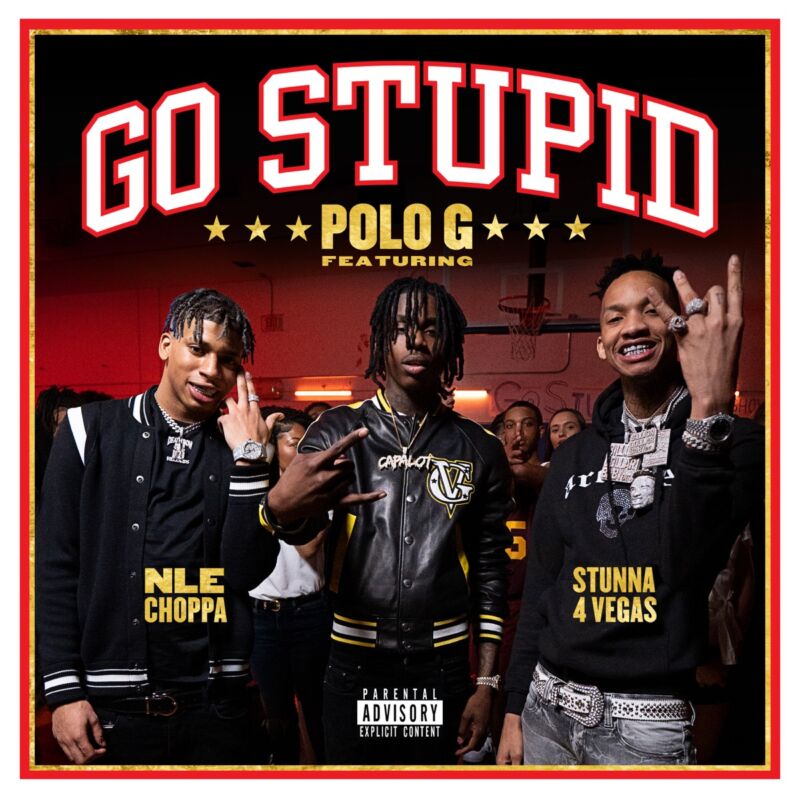 Hit the strip after school, couldn't wait till I got outta class
Used to stare at the clock and shit
Before all this rap shit I was gang-bangin'
And doin' high-speeds on the cops and shit
And I'm straight from the Chi' but I ball like a king up in Cali'
And shoot like Stojaković
Keep applying' that pressure, I go on the run
It ain't no lettin' up, ain't no stoppin' it
Had to tell my lil brother to chill, gotta stay in the house
Come outside, he be poppin' shit
You ain't heard about us? Well, you need to go watch the news
Niggas know we be droppin' shit
Got the feds on my ass in the hood 'cause they think I'm the one
Who been buyin' them Glocks and shit
I'm just focused on music, they say my last tape was a classic
But I got some hotter shit
I be rockin' a show, or if I'm not up in the stu'
Then I'm fuckin' this cash off
Don't you know Polo G, skinny-tall with the dreads
That lil nigga be rappin' his ass off
Yeah, I heard he got surgery, still wanna climb from the back
Just to see if her ass off
Go like horrible rockets, we blast off
Tried to throw us some bullets but we made 'em fumble
Like no, you ain't gettin' that pass off
Spin the block, now I'm takin' my mask off
Hit the gas like we racin', speed off in them foreigns
And leave tire marks on the asphalt
It's gon' be RIP once your ass caught
He like frontin', we knockin' his cap off
'Nother day, a new chain on, mack boss
All this ice got me freezin' like Jack Frost

That boy a bitch, that's his damn fault
If you play, then you late, we could crash out
When I up in his shit, man, it's man down
And be all like pullin' them bands out
DOA, bitch, I get your mans out
A rockstar from the block, I stand out
Came from nothin', I flip my advance off
When I hit the game with my flow, niggas ran off (No cap)
Fuck it, I'm not your average Joe
When I leave the house I tuck it
I'm rich, I don't shop on no budget
He clutchin', my lil youngin want him a bucket
I hop on this bitch and run it
If I said it, I seen it or done it
These lil niggas never robbed nobody
Ain't caught no body
And ain't gettin' no money (Cap)
Where I'm from it's sports or gunplay
We looked up to the killers and dealers
But even them niggas won't make it out one day
Didn't fuck my first M, I'm bein' here, hood fame
Took off like I was on the runway
I'm a star but still personal one way
Then niggas talk but they won't play
We let them guns sing like the choir on Sunday

Yeah, yeah
Hop on the scene and I'm thuggin'
Big Glock on my hip, so you know that I'm clutchin'
Catch me a opp, I'ma down him in public
The police keep askin', I'm changin' the subject
The way I grew up, man, a nigga was workin'
Why the fuck you got a gun you not gonna bust it?
And I'm huntin' success, I ain't doin' no 'Tussin
Trippin' niggas who chase it like he David Ruffin
I ain't gon' cap, I don't even like rappin'
But I love wrappin' them bodies and shit
Fuck the bitch and when I get done
I'ma up my Glock and then rob the bitch
Catch a nigga when he clock out
I'ma get him wacked at his job and shit
And I don't know why the police keep fuckin' with me
'Cause they ain't stoppin' shit, yeah
Spin on your block like a remix
Shoot him in the face, get his teeth lit
Extended clip like a broomstick
Shoot a flick like Netflix
Scratch a opp off the check-list
I just bought a gun off Craigslist
Shooter, I really burn, I'm leavin' a stain
Only thing you see is red shit
If the police behind, we kick dirt
My gun need some drawers, it got nuts
Whole gang we strapped, don't test us
'Cause if a nigga play he gonna get bust, yeah
In the lead, I'm top shotta
Don dada, got the bombs like I'm Gaza
Yeah, yeah, yeah, yeah