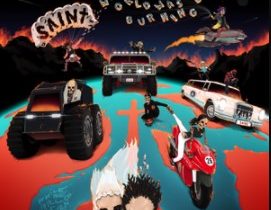 I'm not lookin' for no fiancée
Shit, that already means I'm beyond great
I said, bitch, I'm tryin' to be the next Kanye
Let me know where did she go, this a one-way
That means I came from the gutter, came a long way
Ain't got no time for no love or no fiancée
That don't mean in the future, in a couple months
Maybe we could just meet up once or twice for a little lunch
I don't mean a lot of time, just a little one
I mean pardon me, back then I was a little young
Consider it this way, I am really from
Where the baby Dracos go rra-ba-ba-ba-am
There's an elephant in the room, it weighs a ton

Just a nigga with some money, only here to have some fun
I'm feelin' good, skin sun kissed
Baby, tongue kissin' on your stomach and havin' lunch
Kickin' drums through the city slums, nigga, run
Red rum, red rum, break, give a nigga leg room
They be playin' dumb, I thought somebody said somethin'
But it's probably all inside my head
All these women tryna lie in my bed
Put the venom in my body, it's red
Till a nigga dead, I ain't even scared of it
Tell the truth, I'm never really careful
When it come to you, I'm bein' real (Real)
Had a thing for you since we was lil' (Lil')
Now I got a bigger thing to give (Give)
Music's loud and I don't wanna yell (Yell)
We could talk about it at the crib (Crib)
Or the parking lot, inside the whip (Whip)
I been numb and I don't have a fuck to give
Shut your mouth, baby, button lips
I don't wanna ever have to wonder 'bout another nigga
Ain't a woman I'm lovin' I'm-
Fuck

When in love, is there somebody that you still thinkin' 'bout?
Is there somebody's name that you wanna say?
Are you turnin' your lemons into lemonade?
'Cause if you do, then (Told Lee he'd be a millionaire)

Hello F a l l e n, I'm Jax
Italian fan of SAINt JHN (Very fan)
Very fan, and eh, in fact
I bought two tickets for a Dublin concert
And then will travel to Dublin, I'll leave for you and SAINt
But now, that you have postponed the concert
I have to travel to Dublin, for nothing
I'm so sad (So, so sad)
I was the number one fan of SAINt JHN
He was my favorite artist and now I'm so sad (We are so sad)
Me and my girlfriend